Irdeto is committed to environmental responsibility, which is evidenced by its architectural and interior design and energy utilization principles in its Netherlands office, as well its focus on finding innovative ways to deliver “greener” solutions to the market.

Irdeto’s office in the Netherlands was designed and built with the environment in mind. Located just opposite Hoofddorp train station, the building is equipped with bike racks and showers to encourage employees to use environmentally-friendly modes of transportation. Designed by MIII Architects, this sustainable 10,000 sq. m. office building meets the GreenCalc-score B. 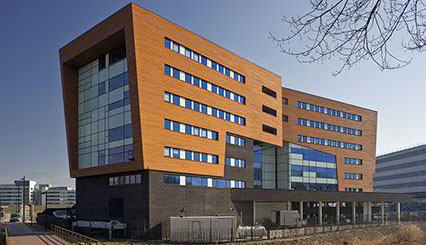 MIII and Irdeto developed the building with a strong focus on sustainability, flexibility and future scalability. The charcoal-colored brick pedestal elevates the building and can accommodate 200 vehicles in a two-story car park. The building is sculpted into three wings, each six stories high, with a centrally-located atrium that features a wooden curtain wall that covers the concrete construction. The wooden curtain wall is made from 100% sustainable Western Red Cedar.The carpeting and inside wall coverings utilize post consumer-recycled content, reducing the amount of trees and other natural resources used in the manufacturing process.

Compact fluorescent lighting with high intensity reflectors also minimize the amount of energy used. Lighting requirements are offset by the many windows throughout the building, and the large skylights in the atrium, restaurant and mezzanine areas.

Floor-to-ceiling windows provide sweeping views of the surrounding terrain, showcasing the relationship between natural and fabricated materials. This eco-friendly building is the perfect design contrast to the digitally-oriented, high-tech company it houses.

Irdeto supports the European Union’s voluntary agreement on energy saving, in addition to the voluntary agreements in the U.S. and Australia. Irdeto also participates actively in industry forums to further the energy saving cause, and offers a sound strategy and practical approach to help our customers become “green” with both new and existing deployments.

One great example of Irdeto’s green initiative is Irdeto Cloaked CA, an innovative card-less software security solution that delivers the same level of uncompromising security as a smart card, for protecting digital TV content. Smart cards, commonly used in pay TV and other security-critical industries, are built from layers of plastic, electronic components, copper and gold among other materials. Many toxic substances such as glues and solvents are used in the production, assembling and packaging of smart cards, and transporting cards between locations and distributing them to end users also require significant logistical efforts and resources, and produce waste.

All this leads to a significant amount of energy usage and waste, which clearly has a negative impact on the environment and incurs costs for operators. While Irdeto’s strategy has always been to help operators renew security over the air on deployed smart cards to keep them in the field for as long as possible, it is common in the pay TV industry for conditional access (CA) providers to leverage card swaps as a way to update security. Irdeto estimated that more than 78 million cards were swapped globally by pay TV operators in 2011, and as many as HALF A BILLION cards would be swapped from 2011 to 2015. As a smart card weighs six grams each, the estimated number of swapped cards in five years represents nearly 3500 tons of waste — comparable to 300 mature elephants!

As a cardless solution, Cloaked CA eliminates the energy and waste associated with smart card production, distribution and disposal. Being “green” does not mean any compromises on the “cool factor”, either, as security updates, new features and functionalities for Cloaked CA can be easily downloaded over the air to the device on both one-way and two-way networks.